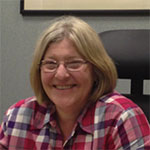 Doris Crouse-Mays got her start as a telephone operator with United Intermountain Telephone (now Century Link) before going to work for AT&T Manufacturing. When AT&T closed its’ New River Valley Plant in 1990, Doris went to work at the Radford Army and Ammunition Plant.

A long-time member of the Communications Workers of America (CWA), Doris went on to work as an International Organizer for the ILGWU (now UNITE/HERE) and CWA, earning her district the union’s highest award for organizing. In 1997, Doris joined the staff at the national AFL-CIO before becoming the Political Director of the Virginia AFL-CIO in 2003.