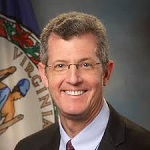 Dr. Dan Carey joined the Northam Administration on January 13, 2018. Dr. Carey had been at the forefront of professional healthcare in Lynchburg, Virginia since 1997. Dr. Carey most recently served as the Senior Vice President and Chief Medical Officer at Centra. In this capacity, his responsibilities included information technology services, patient quality and safety efforts, performance improvement initiatives, and the functions of the medical staff at Centra’s three acute care facilities. In addition, Dr. Carey was the system lead for Centra’s implementation of its new electronic health record.

Dr. Carey has held numerous leadership positions since joining Cardiology Associates of Central Virginia in 1997, which Centra later acquired in 2006. Within a year, he became Medical Director of the Acute MI Program and went on to serve as Director of the Cardiac Cath Lab and Medical Director of the Stroobants Heart Center. Dr. Carey became the President/Chief Physician Executive of the Centra Medical Group. In this capacity, he directed the acquisition of multiple physician practices, growing the medical group from 200 to 300+ providers. He also championed a new compensation model that integrated productivity, quality, service and group culture across specialties.

In 2014, Dr. Carey was selected to become Senior Vice President and Chief Medical Officer at Centra. Dr. Carey has special interest in medical leadership, and in addition to his roles at Centra, has also served as President of the Lynchburg Academy of Medicine, the Medical Society of Virginia and the MSV Foundation. Dr. Carey graduated from the University of Virginia and attended Harvard Medical School.