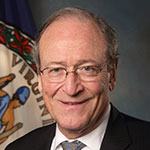 Prior to joining the Northam Administration, Brian was an attorney at Williams Mullen where he concentrated his practice in mergers and acquisitions, securities laws and corporate governance matters. Brian served as a trusted advisor to senior management, boards of directors and audit and special board committees handling such matters as internal investigations and activist shareholders. He also regularly represented clients before state and federal administrative agencies and the Virginia General Assembly. Brian served on the firm’s board of directors and as its General Counsel.

Brian graduated with high distinction from the University of Virginia where he was an Echols Scholar and a member of Phi Beta Kappa. He received his Juris Doctor degree from the University of Virginia. He is admitted to practice in Virginia, the District of Columbia and California. He served as an assistant U.S. Attorney for the Central District of California from 1981 to 1982.

Brian and his wife Jennifer, formerly of Waynesboro, reside in Richmond. They have two children.