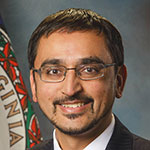 Prior to his appointment as Governor Northam’s Secretary of Education, Atif Qarni taught at Beville Middle School in Prince William County, leading courses in civics, economics, U.S History, and mathematics. He has been a member of the Virginia Education Association since 2008, having previously served as a GED Night School Instructor. In 2016, Atif was recognized as the Dale City Teacher of the Year.

In addition to his work as an educator, Atif is a former Sergeant of the United States Marine Corps, Reserves and was deployed to Iraq in 2003 on Active Duty Assignment during Operation Iraqi Freedom. He has also served at the state level, having been appointed by Governor Terry McAuliffe to the Small Business Commission in 2013.